Errandum - talking about the perceived demise of Fibre Channel in my last post: meanwhile CISCO just quietly announced a new, compact 96-port 16 Gbps SAN switch , the MDS 9396S (in CISCO speak the "S" stands for 16 Gbps). Base configuration starts at 48 ports with SW/license upgrades in 12-port increments up to 96 ports. 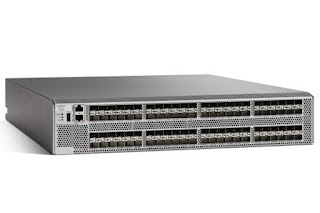 Read the details here and here and find the product home here!
At the other end of the San Jose networking-neighborhood, at "130 Holger Way" (where Brocade is located), an almost flat SAN revenue was reported for their Q2 of FY2015: "SAN product revenue was $314 million, down 2% year over year. The decline was primarily the result of softer storage demand and operational issues at certain OEM partners.".
Posted by Matt Werner at 4:34 AM No comments:

Today, I have a bunch of networking news for you and try to give you some insight on where the industry is moving in terms of SDN (software defined networking). 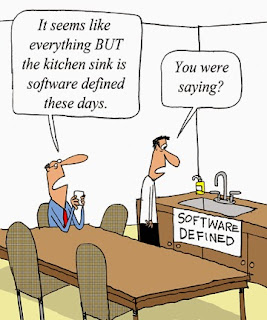 But make no mistake: while marketing slides and vendor presentations suggest that everything "SD" is magic and easy, this is certainly not the case! "SD" at its best may enhance flexibility (customer choice of common hardware building blocks) and provide lower TCO, but the underlying mechanics and infrastructure still needs to provide the functions and performance levels of today's specialized products! So -as always- there's no free lunch here!
Point in case: read this article about the claimed TCO's for the CISCO ACI solution!

Good old Ethernet -as a protocol- is currently undergoing a major boost in terms of standardized speeds and -as a result- increased number of use cases. One of them is the new segment of "Ethernet disk drives". A very promising way of providing access to HDDs directly attached to standard Ethernet (thus no SATA, SAS, ...) as "The Register" writes in this article about a recent Seagate announcement here: "Kinetic is the object storage platform Seagate has built to make it possible to so useful work with its Ethernet-equipped disk drives. Seagate's ambition is to cut arrays out of the loop, allowing software to talk directly to disks. By cutting arrays and file systems out of the loop, Seagate reckons it can save users some cash and also speed things up."
To accommodate the increasing performance requirements of today's networks, the Ethernet Alliance has recently issued an updated roadmap including native 25 Gb/s which is supposed to be productized as early as 2015!
"The Ethernet Alliance recently released its 2015 roadmap, which outlines Ethernet’s response to the ongoing desire for more bandwidth in data centers by adding new speeds for both in-rack and backbone connections. The roadmap calls for some eye-popping speeds in the future, but also charts out a plan for the low end of the market, representing an unprecedented level of activity for Ethernet."
Read the complete article here!

With my longterm Fibre Channel background, I was wondering of course where this leaves the storage protocol which is still dominating most of the datacenter connectivity between compute and storage: For a number of agreeable reasons, as outlined in this great article here, you may argue that FC has a somehow limited future: "Pundits have long predicted the demise of Fibre Channel, but this time it's real. In fact, the decline has already begun and now that RoCE is routable, this decline will accelerate. The last years Dell’ Oro SAN report highlighted a 3% year over year decline in Fibre Channel revenues, citing the need for “distributed scale-out and object-based storage” and a preference for "Ethernet speeds and converged infrastructure.""
Would you agree? 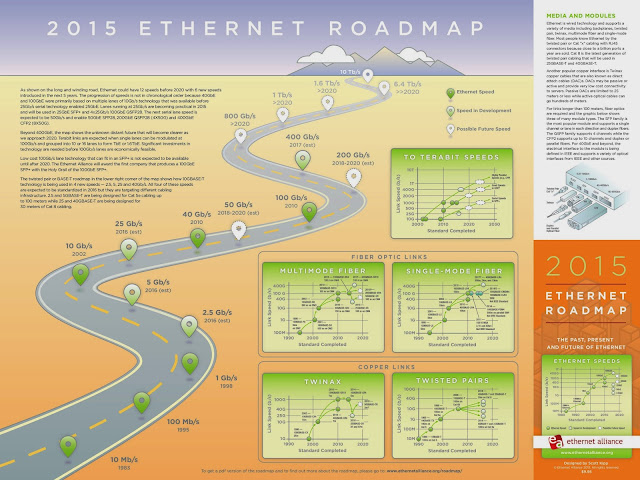 Posted by Matt Werner at 6:33 AM No comments:

It's May - which means that global IT flocks to Vegas for their spring pow-wow's. Starting this week is EMC with IBM next week and others to follow.
So for today, let me focus on the most recent EMC announcements and give you a couple hints on where to find the details.

First, read an overview and summary of the Day 1 announcements here and here!
One of the more exciting - but less visible news seems to be the vVNX (read: virtual VNX or software-only entry storage) offer which shows up in the EMC store - check it out here!

A slightly older post by EMC president Jeremy Burton from two weeks ago also helps to position and understand the strategy behind these announcements as well as his take on how and when last year's DSSD acquisition ("..an insane server-attached flash thing..") will start to be visible in products.

Big news also on the VCE side of the EMC federation: they use the EMCworld platform to make noise about the VxRack (based on VMware EVO:Rack) solution to be shipped around Q3 this year.
Read the overview here and some insights by VCE CTO Trey Layton here.
Lastly, for an understanding what's under the hood in terms of VMware technology, you'll have to scroll back to this VMworld blog entry from last year by VMware Fellow Raj Yavatkar here.

Now wait, before we all get too excited about this, let's put this into perspective: "...Thus hyper-convergence is a special class of server SANs where VM workloads run alongside the storage workloads. It was conceived of to be cheaper, denser and more appealing than legacy convergence. Data centre convergence is a special class of hyper-convergence."
And lastly, there is (always) the issue of pricing, as is outlined here.
Posted by Matt Werner at 12:53 AM No comments: