Great reminder for those of you who did not grow up with mainframes: Here's a look back at storage tiering as it as was implemented on IBM Mainframes in 1989 (eighty-nine)!
Smarter Systems was called System-managed Storage back then (DFSMS) and did pretty much everything (and more!) clients expect from their storage systems today.
And it's still available on System Z, currently in its 12th release (V1R12.0)! 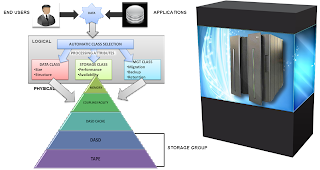 RoHS: you might have wondered what this is all about? RoHS stands for "Restriction of use of Hazardous Substances" and is a directive first issued by the EU in 2003. The RoHS directive requires that six hazardous substances be removed from all electrical and electronic equipment. The substances may be present incidentally at certain levels as long as they are declared.
On January 1st, 2013, RoHS II will become effective. Read here for details on what this implies.

And lastly some very exciting news again from IBM Research: The 12-atom storage!
Posted by Matt Werner at 12:40 AM No comments: