Completing the March topic on Analyst Reports for 2012, here's a comment on what Gartner has to contribute. As Storage Newsletter lines out, IDC and Gartner numbers do not exactly match - which should not come as a big surprise given the complexity of the markets and the somewhat blurred lines between hardware and software revenues and how to account for them. Quote from the Gartner report: "Gartner ECB disk storage reports reflect vendor-branded hardware-only revenue, as well as hardware revenue associated with financial leases and managed services. Optional and separately priced storage software revenue and SAN infrastructure components are excluded."

Gartner also came out with a new iteration of their famous Magic Quadrant: the MQ for what they now call "General Purpose Disk Arrays".  As per their definition, those are "... designed to address shared storage requirements within a single system that can support multiple virtual or physical servers, hosted virtual desktop infrastructures, multiple databases, and applications such as, but not limited to, SAP, Microsoft Exchange and Microsoft SharePoint."
Hmm...sounds like pretty much everything on the market today. To no surprise, the top right quadrant is very crowded, I pretty much doubt that anybody would draw any buying decisions from the cluster of dots arranged in there:

Appliances for a different purpose are the so called PBBAs (Purpose Built Backup Appliances). IDC reports market status and trends for that segment of the market, a great summary can be found here.

More locally to where I sit, there was a press release that last week about an enhanced way of building Flash Memory demonstrated by the EPFL in Lausanne:
"A Swiss government research lab has reinvented flash memory using graphene and molybdenite in a way that should be faster, scale smaller, use less energy and yet more flexible than boring old NAND.
Molybdenite is MoS2, molybdenum disulfide, which is similar to graphite and also has a lubricating effect. Atomically it is a layer of molybdenum atoms between top and bottom layers of sulfide atoms. It is a semiconductor and can be used to create transistors."

In a kind of bold move back to basics, Brocade has announced their latest and final addition to the 16 Gbps family of Fibre Channel switches and directors, now referred to as G5: The Brocade 6520, a 96-port 2U switch.
They not only emphasize the importance of FC SANs (sic!) but also present a strategy to enable easier management integration for Cloud deployments and also comment on their plans for a future 32 Gbps product: " Brocade also is working with the OpenStack Foundation on open source software to manage FC fabrics in clouds. Brocade and some of its OEM partners plan to propose a Fibre Channel SAN Zone Management blueprint at the OpenStack Summit in April."

My take: they should have sticked to their core business which is FC instead of spending millions to try to become another CISCO. Now, at last, I think they realize where their margins and revenue are coming from and are focusing on that important segment of the business again. And FCoE? Yes, what about it? Exactly!
The official FC roadmap can be found at fibrechannel.org here!

Posted by Matt Werner at 5:36 AM No comments:

March is the time when the industry tallies up the previous year's storage numbers, 2013 being no exception!
So let me start with a couple statements and links from IDC regarding the 2012 status of the worldwide storage industry:
First, the official IDC press release, it states that "...the external disk storage systems market generated $24.7 billion in sales during the full year, which represented a 4.7% increase over 2011. Total external disk storage systems capacity shipped during the year surpassed 20 exabytes, which represents an increase of 27% over 2011."

Storage Newsletter and The Register both had great comments and a couple more insights beyond the naked numbers, like the one here from Storage Newsletter: "The storage industry continues to be one of the most successful sector in the IT industry, with total disk systems revenues growing yearly since 2002 except in 2009. But the growth is diminishing. It was 17.4% from 2009 to 2010 then 8.2% from 2010 to 2011 and 4.8% from 2011 to 2012 even if the total capacity shipped continues to explode. It means that the price per gigabyte continues to decline rapidly. Among the reasons: lower price of HDDs, several technologies to reduce total storage capacity of the systems (thin provisioning, compression, de-dupe)."
And finally, a breakdown for the EMEA numbers here.

Agree, these numbers are mostly about HDDs. Technology based on SSDs still play a very minor role in the overall external storage market and occupy a small (but growing) niche. According to Ambuj Goyal, newly appointed head of IBM's Storage Group, this could change soon: "Our play is the all-flash array for transaction processing, not hybrids (arrays combining disk and solid state storage)."

Changing topics: According to the latest Quorum Disaster Recovery Report, natural disasters account for only 5% of the IT outages for SMB customers, see here what the other 95% are!

And talking about DR: Here's the latest speed record for data transfer across optical fibre: "According to a statement from the OFC/NFOEC organizers, AT&T was able to send 400Gbps data transmissions more than 7,456 miles with minimal loss, thanks to new materials and a new modulation technique. Team leader Xiang Zhou said that his setup addresses several key concerns for next-generation networks." 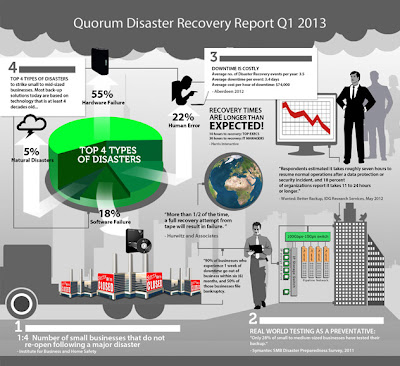 Posted by Matt Werner at 8:47 AM No comments: