It has been quite a while since the last announcement of bigger HDDs: We have had 4 TB disk drives available for about 24 months now! In the past couple weeks however, there seems to be renewed activity in the segment of high-capacity HDDs with HGST (Hitachi Global Storage; subsidiary of Western Digital) starting sale of the much-anticipated 6 TB Helium-drive (add two more platters; same areal density!). 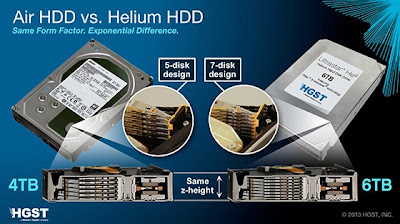 Western Digital (WD) adding to the buzz with their plans (no product yet!) to provide increased areal density using HAMR (heat assisted magnetic recording), a technology which is in development over at Seagate as well!

The third promising candidate in the race to squeeze more bits into a 3.5 inch real-estate is "shingled magnetic recording" dubbed as SMR, details are outlined here.
While this technology basically uses hardware that is available today, it kind of changes some of the very characteristics of HDDs: In-place updates become impractical to impossible with the shingled, intertwined tracks (by the way: we have used this approach in tape drives for many years!). Means that HDDs using that technology will be used preferably for data which is not updated, so archive-type of usages! That's the reason why vendors are actually looking into using LTFS (linear tape file system) to access and manage SMR type of disk drives! See details from SNIA and WD here!

I have not figured out yet which technologies can be combined and which ones don't go together - but to me it certainly looks like as if the next wave of capacity increases for HDD is upon us! The question remains if the costs will be at an acceptable level: with the consumer market (tablets, smartphones) using mostly flash storage, the volumes for these new technology HDDs will probably remain lower than what we have been used to in the age of desktops and laptops?

And finally, wrapping up my update in spinning rust, here's an interesting report from Backblaze (a backup service provider) on how long these small mechanical wonders are supposed to last:
"For disk drives, it may be that all of them will wear out before they are 10 years old. Or it may be that some of them last 20 or 30 years. If some of them live a long, long time, it makes it hard to compute the average. Also, a few outliers can throw off the average and make it less useful.
The number that we will be able to compute soon, and the one that is more likely to be useful, is the median lifespan of a new drive. In other words, at what age have half of the drives failed? We are starting to get an idea what the answer will be."
For additional thoughts and details, please also refer to this report from Google on their observations around drive failure expectations.
Posted by Matt Werner at 2:15 AM No comments: