Let's start with base technology today: we are slowly approaching the 10TB capacity point for 3.5" HDDs.
After Western Digital / HGST (which has been selling a helium-based 8Tb drive for a couple months already), Seagate has announced a 8TB drive as well: Not using helium to allow more platters inside the 3.5" form factor - but obviously basing their product on SMR (shingled magnetic recording) to achieve the required density.
This also explains the specific use case outlined in the announcement, described as "backup and objects": SMR disks use track overlay to reduce track width and thus have a limited capability to perform write updates to existing data / tracks. This is explained very well in this Wikipedia article here. Also refer to my previous blog-entry from November 2013! 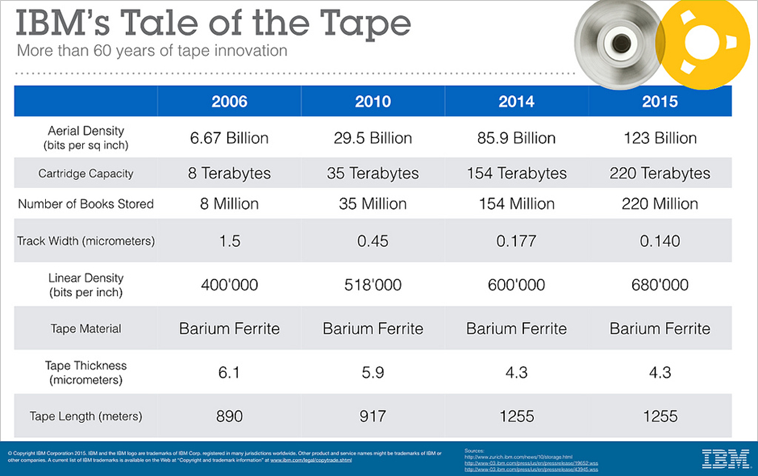 There was other breaking news regarding storage capacity last week: The teams of IBM Research Zurich and Fujifilm have demonstrated an areal recording density of 123 billion bits of uncompressed data per square inch on low cost, particulate magnetic tape, a breakthrough which represents the equivalent of a 220 terabyte tape cartridge that could fit in the palm of your hand ! Read the details here.

Moving up the solution stack, let's talk about " SAN" and it's younger sibling "VSAN": while SAN's have been around for some twenty years now, the current trend has been reversed and storage seems to move back into the server as a "virtualized" resource to be shared by multiple instances of the virtualized servers (VMware, Hyper-V, ....).
Here's a look back at SAN's and a thorough analysis of the capabilities (and limitations!) of VSAN!
VSAN is also one of the building blocks of VMware EVO:Rail and with the recent wave of EVO:Rail appliances hitting the market (among them the EMC VSPEX Blue) I found the article here to be a great summary and overview of this architecture/technology.


Which brings us to the "converged topic" and related material which is plentiful these days! Let's first look at the Q4 2014 market numbers as presented by IDC. The surprising #2 vendor for EMEA for the integrated infrastructure (with a triple-digit growth compared to Q4 2013!) is HP:
As many of you certainly already figured out, "converged" is nothing new - it's rather the inversion of what started in the late 80ies and early 90ies as "client-server" architecture. Read this amusing story here!