It's been a great and long journey - but it comes to an end!
I had started that blog in mid 2007 - which seems ages ago, but only yesterday at the same time.
One of my topics back then was "the comeback of solid-state-storage" - and I'm kind of proud to realize, that I was not too far off in summer 2007, considering all the buzz around flash today and the fact, that IDC just declared that "..the adoption of flash was remarkably quick during the year, with flash systems, both HFA and AFA, overtaking HDD-only systems and representing 51% of total value shipped in 2015 versus 40% in 2014"! 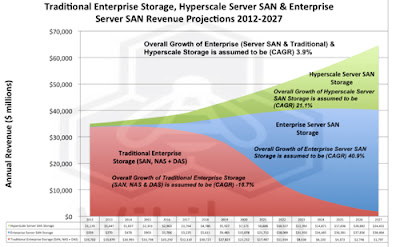 Now, LinkedIn was initially launched in 2003,  Twitter started off in 2006 and these two are the main reason why I feel that investing time to write up my blog does no longer make sense.
And make no mistake: the area of storage and networking is more exciting than ever and our industry is changing by the day, so there would be no lack of news to report!
But typically, by the time I get to summarize my thoughts here, these news nowadays are common knowledge and almost outdated.

So if you are interested to follow my view and ideas on storage and the technologies related to it, please look me up in LinkedIn or Twitter ( @MattWernerCH )

Posted by Matt Werner at 5:27 AM No comments: