One of the future technologies for non-volatile storage is perceived to be the "racetrack" memory, developped in the IBM labs.
Looks like we are another step closer to making this a feasible alternative to Flash-Memory (as its used today in SSD devices).
See the press release and the detailled comment from Computerworld.

On a funny note, ome reading here about China and the Chinese from my favorite Insdustry Analyst and Frequent Traveler Steve D. at ESG.
Posted by Matt Werner at 5:23 AM No comments: 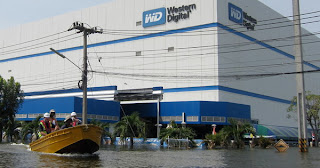 To start with today, let's resume the cloud topic from my last post.
Here's another great summary (by Steve Duplessie) on how, where, and when cloud storage and cloud services may make sense:
"Why do people use these services? Because A: doing it yourself SUCKS, and B: the cost of letting someone else deal with it is at the inflection point–it’s becoming inarguable when you know that A: it sucks to do yourself and B: it’s now cheaper to do it elsewhere."

The current flooding in Thailand is a terrible event and our hearts go out to the people effected and those working to resolve it!
The flooding and its consequences will affect the HDD industry in many ways for the next couple of months as this Computerworld article lines out:
"In the first half of 2011, Thailand accounted for 40% to 45% of worldwide hard disk drive production! As of early November, nearly half of Thailand's production was directly affected by the flooding."

An intersting move from NetApp to add another flavor of scale-out NAS to their product lineup. According to this article here, they plan to bundle LUSTRE, the open source high performance file system, with their E-Series arrays (aka LSI!) to create a scale-out NAS system for the HPC market.

And lastly, the Q3 2011 IDC numbers are in: the worldwide disk market grew to $7.6 Mio in revenue and capacity shipped increased by 31% (y/y) to reach 5.4 EB (Exabytes) or 5429 PB (Petabytes) for the quarter!
Here's some additional analysis and graphs for these numbers!
Posted by Matt Werner at 5:22 AM No comments: