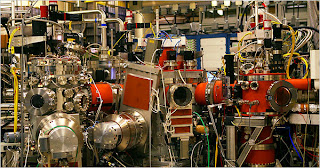 The only IBM announcement we had in the SAN space during the last couple of weeks is the Brocade 10 Gbps and iSCSI blades for the SAN256B Director (aka Brocade 48000), details here.
However, it was a very busy two weeks in terms of IBM Storage Research announcements, there were two major press releases and interestingly, the first one (on Aug. 30) was related to a technology which probably is another 15 years away until we see real products, whereas the second one (Sept, 11) seems to have the potential for a midterm implementation as a product:
IBM's SINGLE-ATOM STORAGE BUILDING BLOCK and how
IBM is to redefine memory architecture: Racetrack Memory
In the arena of good old magnetic disk technology, there was interesting news as well. For one, Seagate announced that it will add encryption capability to its desktop line of disk drives by the end of this year (2007 that is).
And as always around the end of summer, IDC is adding up the numbers from the industry and published the sales ranking for external disk subsystems for the second quarter 2007.
At the other end of the fibre cable, Dell'Oro is busy adding up the SAN ports numbers and causes Brocade to claim a 73% market share for the first half of 2007.
To round things off on a funny note here's the Top 10 SAN Stories this year so far. They include topics like:
Storage virtualization reaches the "Trough of disillusionment",
Cisco goes for the jugular, and BrocData, so check it out!
The Encyclopadia of Business Clichees shows the most abused (buzz)words and if I tell you the "push the envelope" is ranked as #15, you'll certainly want to see what's number 1!
Have fun!
Posted by Matt Werner at 4:27 AM No comments: