304 - This was the magic number for July. 304 hours of sunshine in Zurich in July 2013...most likely won't be repeated for a couple years. And I was lucky enough to get three weeks of vacation during that time! 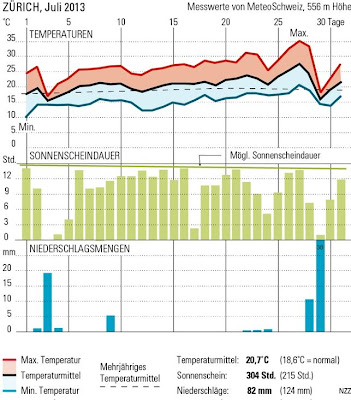 Now, back to business this week!

There was quite a bit of news coming from the FlashMemory Summit taking place in Santa Clara this week during the otherwise quite days of summer. My today's update will thus be somewhat SSD- and Flash-biased!
Faster, cheaper flash storage is hitting the enterprise market and Computerworld had a great overview on new products and technologies being introduced.
As it has been the case with every piece of IT technology in the past, consumer products lead the way and the volumes achieved there eventually help drive down costs and make components (Flash Memory in this case) viable for enterprise products. In the case of SSD, the Ultrabooks and Tablets are driving up volume shipments, as outlined in CW.

Amazingly enough, there's companies like Facebook who require "the worst flash possible...just make it dense and cheap." Write-once, read-never would be the spec for this type of Flash. I'd think that probably tape storage would make a lot more sense in such an environment?!

As a matter of fact, Flash Memory and SSDs have reached enough momentum in the market to stir some countermeasures and activities on the side of the HDD ("spinning rust") vendors: "The Storage Products Association (SPA) was formed as a mutual benefit nonprofit corporation in California to promote the use and understanding of rotating magnetic media hard drive (RHD) technologies as a critical component of the future digital storage ecosystem."
Companies behind SPA are (Aug. 2013): HGST, Seagate, Toshiba and WD.

On their website, they have compiled a very nice infographic with a couple amazing facts around disk storage!
Posted by Matt Werner at 5:21 AM No comments: