I noticed some time ago that the most recent news thread from the IT and storage industry increasingly sounds like a weather forecast:
Sunny skies with clouds developing in the atmosphere during the day...
Let's all hope we don't get too much rain from all these clouds!

Actually my friend Tony Pearson has a great post on the Atmos-thing announced last week.
And if you thought the concept of cloud storage was new, check out this research paper dated from 2000: they called it OceanStore back then, but clouds and oceans both hold water and span the globe (any other similarities?).

So if you feel like storing some of your digital files and documents in the cloud today, go to the Wuala website, this Swiss startup has recently opened their service to the public. It should have been named Clouds'R'Us, because the cloud actually consists of the storage of all the participating users in this implementation. Great idea!

As you may have noticed, the rate of density increases on traditional HDDs has slowed since 2004/05 and the justification for this is documented here: A guy by the name of Mark Kryder claims that the increase in density even beats the increase on the chip side (aka Moore's Law)..or maybe not?

In any case, the age of SSDs in the enterprise seems near (IBM has coined the term SCM (storage class memory)) and here's a video which shows a possible implementation/integration of SSDs in the IBM SVC virtualization solution.
Posted by Matt Werner at 5:12 AM No comments: 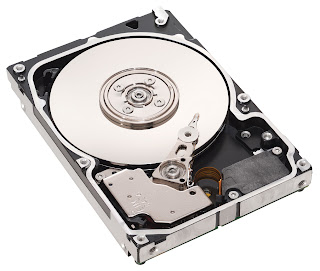 Couple news from the HDD vs. SSD front:
Seagate announces a new 2.5 inch high-performance enterprise drive and Intel releases a first revision of NVMHCI
(another one to get used to? Stands for "Non-Volatile Memory Host Controller Interface").
NVMHCI is a good thing as it probably will raise the awarness of the fact, that it does not make sense to use solid-state memory embedded in systems architectures and file systems which have been designed entirely around the characteristics of rotating disk drives! Read the pros and cons here!
In the storage networking realm, CISCO seems to suffer a bit under the fact that they are kind of late to the 8 Gbps Party which Brocade started some nine months ago.
Meanwhile, Qlogic silently shipped the first products with 20 Gbps ISL capability, while CISCO plans to take advantage of their recent investment in VMware by integrating their stuff more tightly with the virtualized data centers.
If our customers will have funds available to invest into these technologies in 2009 is rather uncertain at this time:
IDC takes a rather pessimistic approach, while IBM's Sam Palmisano believes that the IT Industry in general- and IBM more specifically- are well positioned to actually support a technology-fueled economic recovery.
However, I have to admit that I strongly disagree with the stated example of "Stockholm's smart traffic system" mentioned in his speech (aka road pricing): as far as I can see, this is simply another means of collecting taxes and has absolutely nothing "smart" to it!
Posted by Matt Werner at 4:18 AM No comments: