Very busy times - as always in April/May there is lots of activities, product announcements, events and customer projects, so I did not pay too much attention on what's going on in the industry for the past couple weeks...
One of the major events was SNW Spring which took place in Orlando FL, you can find a nice write-up of the major topics and trends from that event here.

As you might guess, SSD was a hot topic at that conference! And actually, one of the recent key IBM announcements was the first IBM FlashSystem and related to that, a massive investment in flash technology for the next couple years. FlashSystem is a "blue-washed" version of the TMS RamSan systems which IBM acquired in 2012. 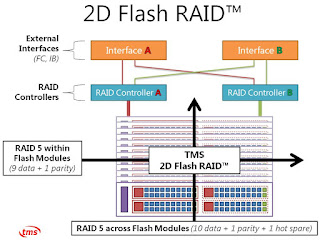 But other than using SSD drives in a "legacy" disk array, FlashSystems are designed around the very characteristics of Flash Storage and thus can take advantage of the very low latency (100 microseconds!) and high performance that these storage building blocks offer!

As we all know, flash technology and SSDs are increasingly used in huge volumes for tablets and smart phones. And that market transition away from desktop and laptop PCs is felt in the HDD industry: Seagate has to deal with a significant drop in the amount of HDDs sold: "Hard drive-maker Seagate's third quarter profits slipped by a whopping 64 per cent year-on-year as the company's bottom line was hit by users deserting desktops for tablets."
However, HDD prices still seem to be declining as reported here, albeit at a much slower rate and partly due to the increased pricing levels we had in early 2012 after the Thailand flooding.

And -while remaining in the past- StorageNewsletter has compiled an amazing list of web resources around the "History of the Storage Industry", this requires some time to enjoy, so store that link for a rainy weekend (which we will have again very soon for sure!).
Finally, and concluding my trip to the past for today, here's another view at the past 20 years of our industry: Did you know that "IBM Adstar" was the worlds biggest storage company in terms of revenues in 1992?
Posted by Matt Werner at 2:54 AM No comments: